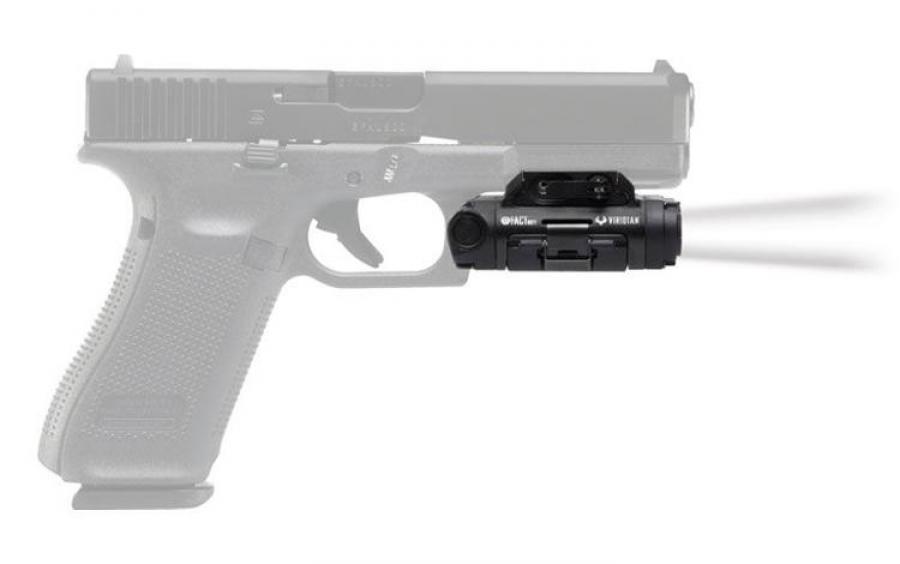 Medina Police are purchasing 10 gun-mounted cameras for use by the department’s sworn police officers. Gun-mounted camera recordings will complement recordings of police incidents by the current squad car cameras. (Graphic courtesy of Veridian Weapon Technologies) Facebook Twitter Email Print Save Medina Police are on the way to employing gun-mounted cameras by the end of April and eventually adding body mounted cameras to an equation that already includes squad car mounted cameras. The Medina City Council, Tuesday, March 19, held a public hearing on the city’s policy for maintaining, releasing and erasing portable audio/video recordings — a hearing required by state law. After the hearing, the council approved the policy and purchase of 10 gun mounted cameras from Viridian Weapon Technologies of Maple Plain at a total cost of $6,720. Money for purchasing the cameras will come from a $5,000 donation made to Medina Police last year along with money the police equipment forfeiture fund, said Public Safety Director Ed Belland. He said Medina Police tested the gun-mounted cameras for four months and discovered that the cameras make crisp clear video recordings. The new cameras will enhance the video records already available from squad car mounted cameras. The cost to equip an officer with the Fact Duty gun mounted camera for five years is $799, compared with the five year cost of $9,643 for a body camera, according to the Viridian website. Cheaper data storage costs with the gun-mounted camera are the reason. Data is downloaded from the camera and kept on police department computers. Belland said only sworn police officers would use the gun-mounted cameras. A magnet in the holster turns the camera on, when an officer draws the gun and turns it off when he or she re-holsters it. Data must be kept for a minimum of 90 days. Meanwhile, the majority of police departments in Hennepin County are working with the county to create an affordable plan for police agencies to equip their officers with body cameras, Belland said. He expected Medina Police to continue to use gun-mounted cameras after officers are equipped with body cameras. Squad, gun and body mounted cameras each show different aspects of police encounters. Medina’s policy for portable audio/video recordings of police incidents includes squad, gun and body mounted cameras. RAILWAY QUIET ZONE Turning to the subject of railway quiet zones, the City Council approved an agreement with Canadian Pacific Railway relating to the railroad crossing at Arrowhead Drive. CPR will install crossing panels on the east side of the railroad crossing to accommodate Medina’s installation of a sidewalk and trail. The crossing panels will cost Medina approximately $18,000. City Engineer Jim Stremel said scheduling and installation of the crossing panels could take up to nine to 12 months. Meanwhile, Medina is proceeding with preliminary design of the quiet zone and pedestrian crossing improvements. The city is working with a number of agencies to move the project forward. Construction is planned for 2020. SANITARY SEWERS FOR THREE RIVERS PARKS Turning to the topic of sanitary sewers, the City Council approved an agreement between Medina and Three Rivers Parks for connecting four new restroom buildings and one new boat rental building to sanitary sewers. The new park facilities will replace six restroom buildings and a boat rental building. NEW PUBLIC WORKS FOREMAN In other action, the City Council appointed Derek Reinking to serve as public works foreman, effective July 8. He will replace Ivan Dingman who has told Medina that he will retire on July 8 after a lengthy career with Medina. This is a promotion for Reinking, who currently is a full-time public works maintenance technician. The City Council approved the job description for this position and authorized city staff to seek his successor. SECOND BOARD OF APPEALS Turning to the subject of property taxes, the City Council scheduled a second local Board of Appeal and Equalization meeting for 5:30 p.m., Tuesday, April 16, at Medina City Hall. At the meeting, the board will review applications that were presented at the April 3 meeting without first contacting the city assessor. No new appeals will be heard at the second meeting. At Local Board of Appeals meetings, property owners ask questions about their property values and may begin a protest process. Resulting property values are used in calculations of individual property taxes for taxes payable in 2020. OTHER The City Council also: TABLED until April 16, the request of Maxxon, 920 Hamel Road, for a variance and site plan review. The council originally approved a 5,190 square feet two level addition to Maxxon’s facility in 2018. At this point, Maxxon has not constructed the addition and is proposing changes in plans for dealing with storm water. DIRECTED city staff to prepare a resolution approving a request of Wally and Bridget Marx pertaining to their conservation design subdivision at 2800 Parkview Drive. The Marx’s requested an amendment to the Planned Unit Development General Plan and preliminary plat. The plat shows six residential lots. Seventy acres of the 89.75 acres will be placed in permanent conservation easements.