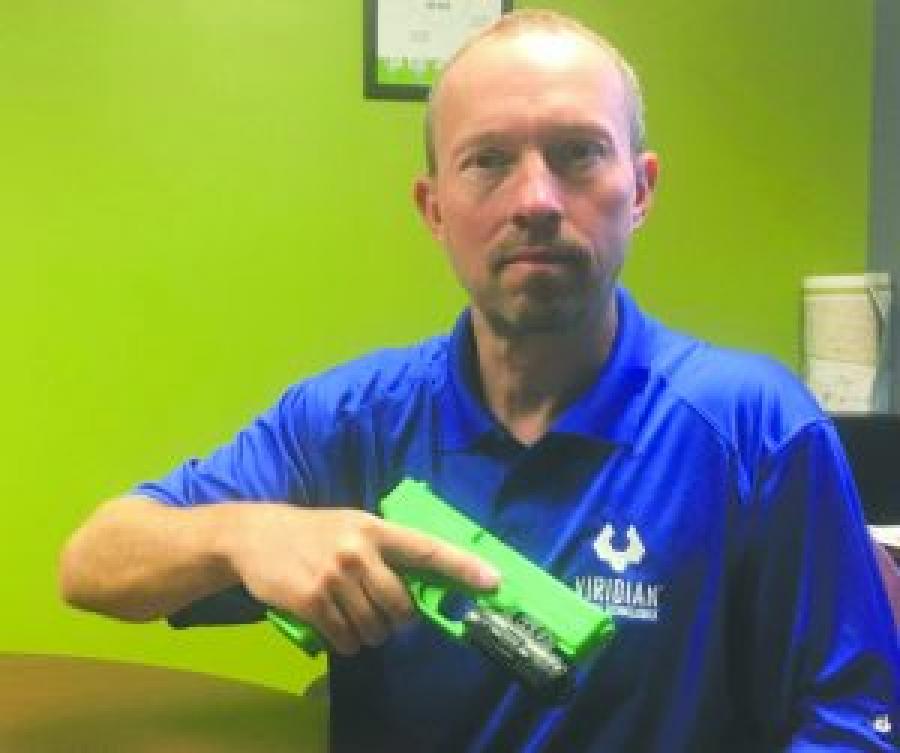 n June, a white South Bend, Indiana, police officer allegedly shot dead a black car burglar because, he said, the man had a big knife, and threatened him with it. But no one could tell the truth for sure, because the officer had neglected to turn on his body camera beforehand. The controversial incident was bad news for South Bend Mayor Pete Buttigieg, a candidate for President of the United States. It was bad news for the cop, too, who resigned. It didn’t have to happen quite that way, however, several people in Maple Plain, Minnesota, told me two months later. Last year, they lent a South Bend police sergeant, now retired, a new device for testing that could have helped establish the truth. But he never tested it. The Minnesota people work for Viridian Weapon Technologies, which sells a little gadget that fits under the barrel of a gun, and automatically starts shooting video and audio in whatever direction the gun is pointing as soon as it comes out of the holster. The “Fact Duty weapon-mounted camera” won’t stop until the pistol is reholstered, unless you pry out the battery or, I suppose, pound on it with a hammer. Ken Garcia, spokesman for the South Bend department, said he couldn’t find anyone among police brass who even knew about the possibility of testing such a device. “We never got around to doing the testing,” said the former sergeant, Chad Goben, who now sells body cams for a Georgia-based firm. Chief Randy Agan of the Vernon, Texas, police department, did test the gun cams, and bought them for all his officers. Last April, some of them tried to serve a warrant on a gentleman named Walter Oreallana, who allegedly opened fire on them. They shot back. He was injured, and one of the officers, Corporal T.J. Session, sustained a shoulder wound. But first, his gun cam got the whole thing, Agan said. Not his body cam, and not the dash cam. Body cams, even when they’re on, don’t necessarily see what you want them to see, he said. The gun itself, the officer’s hands, and whatever he might be using for cover can all get in the way. “There was no obstruction that you usually get from a body cam” with Session’s gun cam, Agan said. “It takes the doubt away. It sees what the officer sees.” The little device includes a light, so at night, it illuminates the scene for the camera at the same time it shows the police officer what he’s shooting at. “I think this system needs to be on every gun in law enforcement,” Agan said. You will not see it, apparently, on the guns of the Chicago Police Department, though one might think they’d be a good fit. The department, according to a recent consent decree signed by the department, must require the filing of a report every time a CPD gun is pointed at anyone. The process that led to the decree began as a result of the 16 bullets fired by a Chicago Police officer into Laquan McDonald in 2014. “While each of CPD’s 22 districts have been equipped with and trained on body-worn cameras which would capture firearm pointing incidents, there aren’t any plans on investing in weapons-mounted camera technology,” spokesman Luis R. Agostini told me in an email. That’s quite an investment. At $750 per gun, including special holster, for the department’s 12,000 sworn officers, it comes to $9 million. The investment does not seem as outlandish, however, when you consider that police misconduct cost the city, 2004 through 2016, $662 million. And that Chicago’s annual police budget is $1.6 billion. The cost of data use by the gun cameras are a fraction of the costs for body cams and dash cams (which are usually set to engage when the roof lights go on), because they rarely are called upon, users told me. “It’s nothing compared to what it is with our squads,” said Gary Kroells, director of Viridian’s home department, Minnesota’s West Hennepin Public Safety Department, which has been using the system since early 2018. Any police department which has body and dash cams can retain them to provide more context for incidents, and police officials I’ve spoken to say that existing data-compiling systems make it easy to organize all of that video, and connect it to a written report. “I wouldn’t use them stand-alone,” added Sgt. Jim Constantino of the Farmington (Minnesota) Police Department, referring to the gun cameras. His department employs them along with body cams and dash cams. Farmington, like Chicago, uses gunfire-avoiding de-escalation tactics, and he wants that caught by the body cams and dash cams. “If it’s not on video, it didn’t happen,” he said. He added that his department’s use of the new system protects the rights of officers as well as members of the public, and doesn’t indicate it’s “out to get anybody, a ‘gotcha,’ and the officers understand that.” Sales of the gun cameras, rolled out in 2018, are starting to pick up, but only in smaller towns, so far, sales manager Kevin Skalicky said. “Law enforcement is really skeptical about a new product,” he said. And by the time a department is ready for an annual budget, there’s always something more conventional to spend money on. Texas’ Agan says gun cameras will inevitably catch on with law enforcement leaders. “As soon as we dispose of (the Oreallana) case and we release the video to be viewed … I think they’ll start seeing the importance of it.”