Viridian and the WMC is now finding itself in the middle of the 2020 Presidential Race politics. The leading Democratic frontrunner after the latest Iowa presidential polls is Mayor Pete Buttigieg of South Bend, Indiana.

Widely known as "Mayor Pete", he is known as highly charismatic and progressive. Mayor Pete, at just 37 years old, is the youngest of the roughly 20 candidates seeking the Democratic nomination.

On June 16, 2019, the City of South Bend experienced an Officer Involved Shooting. South Bend PD Sgt. Ryan O'Neill shot and killed 54 year old Eric Logan. Many details remain unknown to the public, but it was confirmed that Logan, a black man, was armed with a long knife but not a firearm. The detail we have is that Sgt. O'Neill confronted Logan after reports of cars being broken into. Sgt. O'Neill has reported that Logan lunged at him with a knife. Current media reports indicate that there were no witnesses in the area.

South Bend had implemented a Body Worn Camera program in 2018 at a reported cost of $1.5 million. Yet again, however, the officer's Body Camera was not activated. South Bend's policy left it to the discretion of the officer to activate the body cam. There may not have been a violation of this policy and the policy going forward will certainly require almost full time Body Camera activation while officers are on duty. "With a policy that gives officers discretion on when to use the cameras, and without technology to automatically start recording when an officer draws or fires their weapon, the city ended up with no footage of the confrontation between Sgt. Ryan O'Neill and Eric Logan […]"Mayor Pete himself said "body cameras only work if they're activated." We agree. 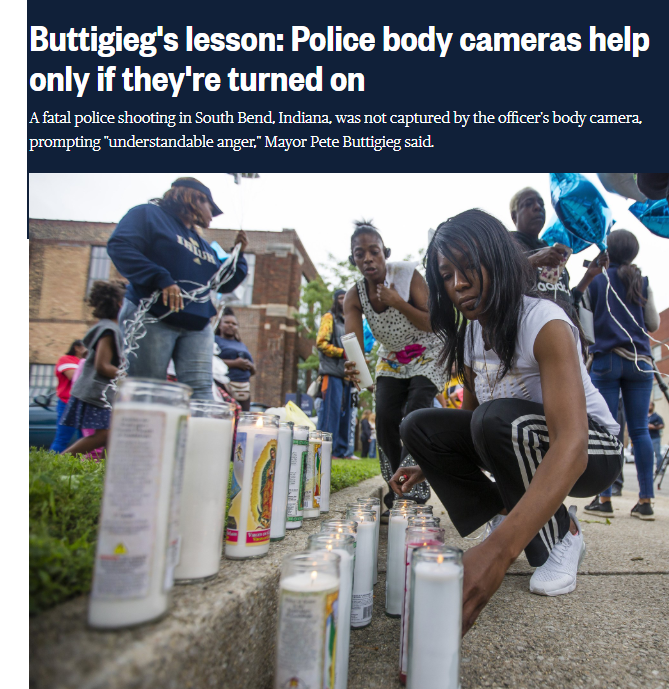 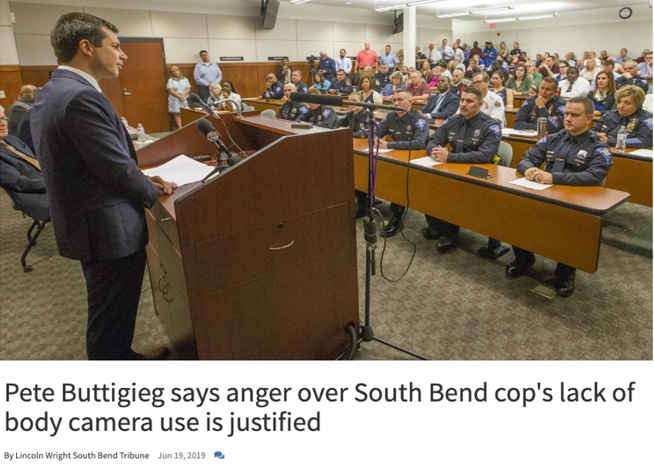 Similar to the Justine Damond matter in Minnesota, the public outry and protest escalated significantly when word of the Body Camera failure became public.

From this seat and reviewing public reaction to hundreds of officer involved shootings per year, nothing is as antithetical to transparency as having a means for this transparency and voluntarily not using it. Most rational minds would agree that an OIS can happen, but the outrage comes when events occur without all potential transparency. People like to know what really happened before forming a judgment. It appears in this case, we will never know the answer, so the media and interest groups will control that narrative – regardless of the outcome of any decision to charge the officer. 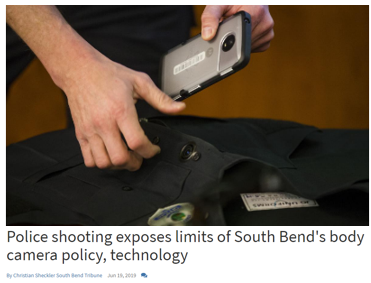 Inconvenient it seems for Mayor Pete. His opponents have been quick to jump on his record of race relations and current handling of the officer involved shooting aftermath.

Many of the citizens of South Bend have attacked him as well. 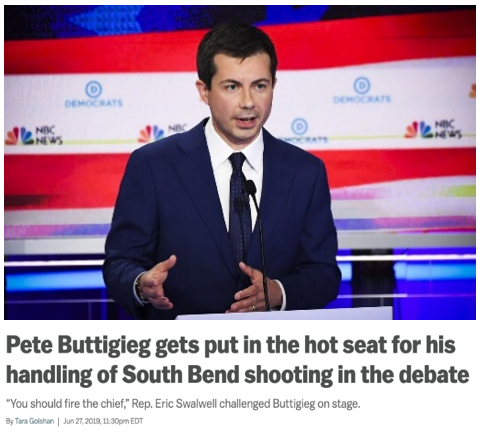 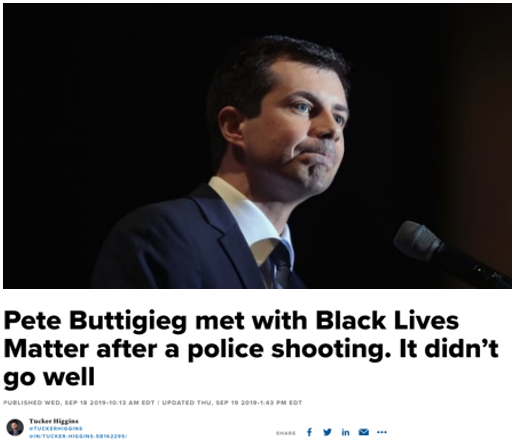 The campaign scrambled to respond with town meetings and new demands for the PD.

It is unclear what the ultimate fallout to Mayor Pete will be. Headlines have briefly faded, but as charging decisions come out, and any existing evidence is released, public reaction will arise again. Don't think Mayor Pete's campaign team is not aware of this and trying to get out in front. 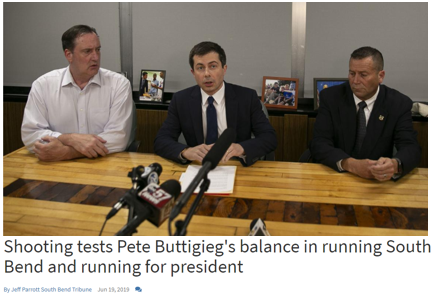 What Mayor Pete very likely did not know is that the South Bend PD had the opportunity to have avoided this mess altogether. South Bend was one of hundreds of law enforcement agencies around the U.S. that signed up to test and evaluate the WMC. As we have publicized in many forms, with Instant-On technology, the WMC does not rely on the police officer's discretion to activate. Had South Bend moved toward full deployment of the WMC, even though the Body Cam was not on for whatever reason, there would have been video from the end of the firearm from the time the gun was drawn through the shooting event. Mayor Pete may still have had some publicity issues about the shooting of a black citizen and some controversy may exist until the point where it would be appropriate to release video coverage. Mayor Pete, however, would at least not have to be explaining the failure to utilize a $1.5 million investment for the most critical basis for the investment in the first place.

What happened to the WMC in South Bend? We don't know. The testing unit was sent to police personnel, but they were largely unresponsive to our follow up attempts by our sales staff after that (which happens on occasion). We ultimately got in touch with the authorizing officer who was leaving employment with the department. We were only told that officials higher than him "were not fans" of the WMC. The testing kit sent to South Bend was returned without comment or communication to us soon after. We have informed media outlets covering the story and the South Bend city officials of this fact and have had some follow up interest in news stories. Mayor Pete is quite insulated by a large staff coordinating his campaign. We speculate that Mayor Pete and his Presidential supporters will have some questions about why the South Bend PD officials "were not fans" of technology that could have helped preserve a presidential run that was and will continue to be seriously wounded by the aftermath of an officer involved shooting of an unarmed black man that was not captured by Body Cams that cost $1.5 million to implement. We will stay tuned.