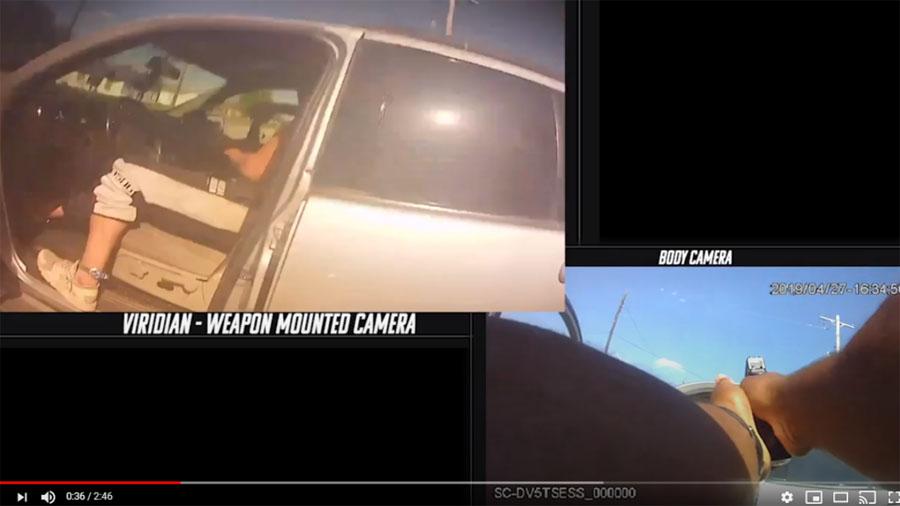 MINNEAPOLIS, Minn. – May 6, 2020 – In April 2019, Vernon Texas Police Corporal T.J. Session was shot while making contact with a suspected felon. The incident took place in the middle of the day with a body cam, dash cam and Viridian’s FACT Duty™ Weapon-Mounted Camera (WMC™) all present. Session was injured in the incident but was also able to shoot the perpetrator. Session has recovered and is back on duty. In the trial almost a year later, the gun camera provided crucial evidence that led the jury to sentence the defendant to 40 years in prison. After the trial, Viridian created a time-synched video showing the incident unfold from the body camera and gun camera simultaneously.

The WMC provided the critical evidence in the case by showing the defendant pointing a sawed-off shotgun at Vernon Police Corporal T.J. Session during an exchange of gunfire in which both Corporal Session and the defendant were shot and wounded. This was the first time an officer-involved shooting was captured by a gun camera. Body camera and dash camera video was also available from the incident, but the Viridian FACT Duty provided the only unfettered evidence of the defendant reaching for a weapon and subsequently shooting the officer.

“We invented the FACT Duty to provide a totally new perspective in Officer-Involved Shootings and use of force incidents,” said Viridian President and CEO Brian Hedeen. “While we never wish any officer to encounter the danger and evil Corporal Session did in April of 2019, the evidence captured in the incident was invaluable.

“Our Gun Camera was able to deliver the clear view from Session’s service weapon that led to the conviction of the criminal—and also showed the world what happened and why Session was forced to shoot. A time-synched video of the incident from the point of view of the gun camera and body camera was put together. This footage not only shows why we feel every officer should have a Weapon-Mounted Camera—but can be used for valuable training in the future. And finally, it shows why we advocate the use of gun cams either with our without body cameras or other evidence-gathering devices.”