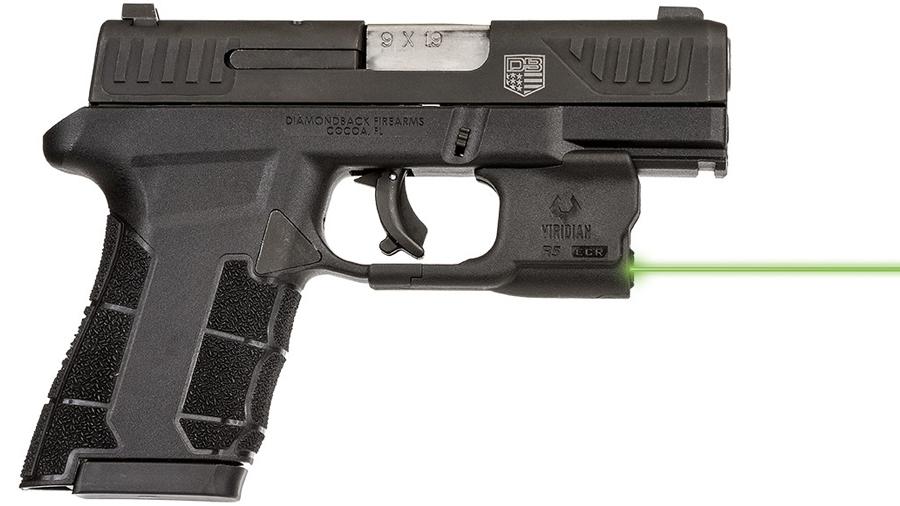 “Viridian is proud to partner with Diamondback Firearms on these new offerings,” said Viridian President and CEO Brian Hedeen. “Combining our laser sights with some of the concealed-carry pistols from Diamondback provides consumers with more quality options for concealed carry and personal defense.”

Viridian’s E Series laser sight is made for the everyday conceal and carry owner who demands the most powerful red laser allowed in the United States. The E Series is now available for Diamondbacks’ DB380 and DB9 micro-compact pistols, designed from the ground up for concealed carry.  The E Series lasers from Viridian can further optimize these concealed carry pistols by delivering rapid target acquisition when it’s needed most.

The REACTOR R5 green laser is up to 50 times brighter than red, making it the ultimate targeting system for concealed carry pistols. Each REACTOR laser includes a DeSantis leather IWB holster that is equipped with Viridian’s patented  INSTANT-ON® technology, ensuring that the laser activates automatically when the gun is drawn.

Now available in a package with the Diamondback AM2, the REACTOR R5 compliments the 9mm AM2’s lightweight design. The AM2 is built on a polymer frame and has a striker fired double action only trigger and a magazine capacity of 17 rounds. The Diamondback AM2 pistol/laser packages will be available in three different color options: black, flat dark earth and black with a duo-tone slide. Diamondback will also carry the Viridian E Series and REACTOR R5 lasers on its website, available for purchase as an accessory.

Established in 2009, Diamondback Firearms started out by delivering reliable precision machined components for our partnering distributors. With every part being machined or assembled in-house with materials coming from companies all over the U.S.A., our dream continues to evolve with weapon systems that now include our DB9, AM2, DB9R, DB rifle series, and DB pistol series.  Find out more at DiamondbackFirearms.com.