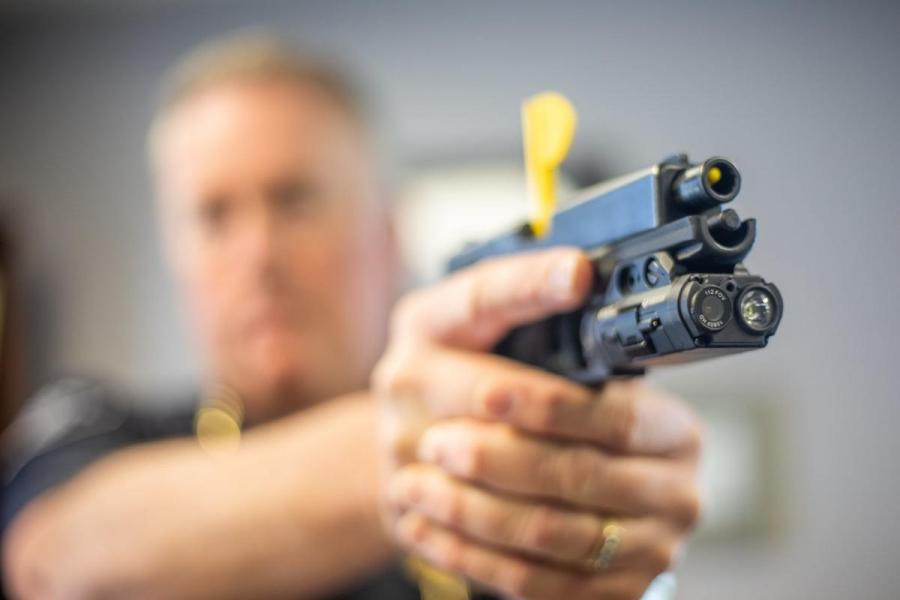 WOODS CROSS — Police in Woods Cross are experimenting with gun-mounted cameras, envisioning a new layer of transparency and an additional hedge against lawsuits filed after shootings. “On the gun it’s a whole different video than the body cam,” said Woods Cross Police Chief Chad Soffe, who carries a gun-mounted camera and hopes to outfit his 16 patrol officers with them. “With the body cam you see a lot of forearm” when an officer has the gun out, he said. Soffe’s experimentation with gun cams — he first deployed them last year while chief in Garland — comes at a time of heightened scrutiny of Utah law enforcement after a heavy run of police shootings the past few years. Soffe also sees gun cameras as an administrative tool in shooting reviews. Because the cameras automatically activate when the firearm is removed from its holster, there’s a video record for every instance of an officer drawing and pointing or firing. He said he’s been on cases where shots were fired and an officer said he had not fired, “when we know he did.” “When we clear a building, when the doors open and officers have guns out, (the camera) shows what they did, did they point it at anybody … they can’t come in and say ‘I didn’t take my gun out.’” Soffe also is encouraged by the relatively low cost of the gun-mounted camera packages, about $500, including high-definition video, microphone, tactical light and secure holster. He said some officers already spend up to $400 of their own money just for a tactical light. In addition, video data storage needs — the bane of some large-city departments because of the costs — are “minimal” with gun cameras, Soffe said. Body cameras, about $400, record entire interactions, which can include extended activity on a call. Police value that record but it consumes a lot of data storage. The automatic activation of gun cameras is appealing, Soffe said, pointing to news that of 10 Salt Lake City officers recently involved in a high-profile chase and shooting, just three activated their body cameras. A Salt Lake City Police Department spokesman, Detective Greg Wilking, confirmed that fact Tuesday and was asked if his agency has looked at gun cameras. The department has been reviewing technologies that foster automatic body cam activation, Wilking said. “But the technology has changed in a way that makes it a little bit difficult,” Wilking said. Some packages require “the newest cars, cameras, Tasers, gun sensors in holsters,” he said. “The question is really, can it be cost effective? Can we make that happen? And so far we haven’t been able to.” Soffe said he was approached by gun camera manufacturers while serving as sergeant-at-arms of the Utah Chiefs of Police Association, and he decided to try them. He said as far as he knows, no other Utah police agencies have gun-mounted cameras. After he left Garland, that Box Elder County city’s police force was merged with nearby Tremonton’s. Kurt Fertig, Tremonton’s police chief, said the new combined agency is not using the gun cameras “and I don’t know if we’re going to use them at all.” “I love body cameras,” Fertig said. “They are mission critical now with police work. They’re good for the officer and good for the public.” He said data storage isn’t as big of a budget problem for small forces like Tremonton’s. Orem Police Chief Gary Giles, president of the chiefs association, said there’s no groundswell for gun cameras, but departments are paying a lot of attention to body cam activation improvements. One setup activates all officers’ cameras at a scene when one is activated. “I don’t fault anyone for offering gun-mounted,” he said, but added, “The advantage of on-body cameras, they record all dealings, even before a gun is drawn.” Giles’ predecessor as chiefs association president, Bountiful Chief Tom Ross, said he has little interest in gun cameras. “I have not evaluated gun cameras because we already have body cameras and mobile car cameras, which seem to fit our needs for now,” Ross said by email. “I’m not too excited to add a third camera to the mix since the ones we already have eat up a lot of time and money to maintain, manage and store video.” Black Lives Matter Utah‘s leader said she is thrilled by what Soffe’s department is doing. “I love that too much for words,” Lex Scott said. “That makes me very happy. The more accountability we can achieve, the better.” Scott recently criticized how authorities handled the March 23 police shooting of Jamal Bell in Harrisville. Police body cam video released April 4 showed officers shot Bell after he advanced toward them with objects in both hands. Police said they were knives. “We prefer they not use guns and attempt to use less than lethal weapons, and then release the footage within 24 hours after the incident,” she said. Soffe said Woods Cross City officials so far have been amenable to his plans for gun cameras. “We’ll test them and work them into the budget for each handgun,” he said. “If we never shoot anybody, it’s a total waste of money,” Soffe said. “But in time, if there is a shooting and there are questions, we may save the city millions of dollars in lawsuits.” You can reach reporter Mark Shenefelt at mshenefelt@standard.net or 801 625-4224. Follow him on Twitter at @mshenefelt.